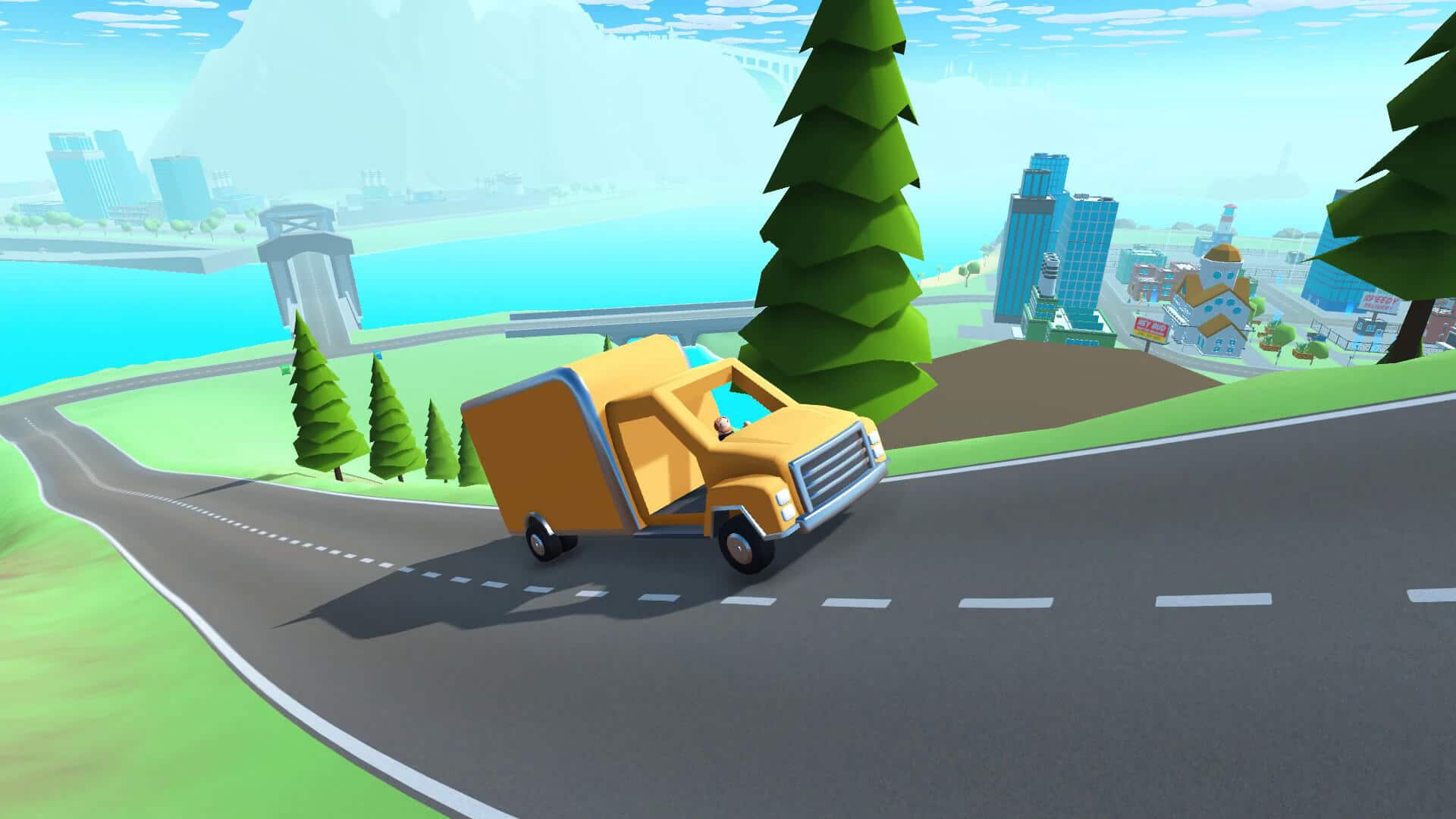 Moving house is considered one of the most stressful experiences in your life, but I’d argue having your internet drop as worse. An hour or two without por – poetry? Heaven forbid. As there’s no bandwidth game, let’s have a look at Totally Reliable Delivery Service on the Switch.

In these modern times, delivery drivers are the backbone of keeping us safe; delivering our 15kg bags of kibble for our dogs to live like kings, dropping off an essential Burberry dress for your wife or an elusive copy of Final Fantasy VII Remake. The job seems like a safe bet, so you get armchair critics saying:

Good luck with that. Been there, done that. It wasn’t a remotely easy experience, and neither is Totally Reliable Delivery Service, out today in all good bookshops. Not that it’s a simulation of sorts, but to put it in perspective, it makes the controls of Gang Beasts play out like a 6ft jigsaw puzzle with four pieces.

There’s no mucking around with Totally Reliable Delivery Service – you’re expected to do your rounds almost immediately so forget about any lengthy tutorials. Aside from a few do-gooders giving you orders and the occasional pop-up, you’re on your own.

But what do I have to do in the game?

Deliver stuff. Most objectives are initiated through pulling a lever, or as Americans say ‘lever’, on a stationary post/delivery box. A parcel or various sizes will spawn and sometimes the odd vechicle with a timer that kicks off in the top corner of the screen.

The game doesn’t end if you don’t deliver in time, but the longer it takes, the less likely you will get a gold award. Y’see, that’s the trials of the game: deliver as fast as you can. However, when you’re spending a good couple of minutes to pull a lever to pull away in a vehicle or knock yourself out trying to get in the driver’s seat, you know this is going to be a challenging game.

It’s not that Totally Reliable Delivery Service is a hard game on paper; the distances you have to travel to complete a job makes the drop off points in Crazy Taxi look like the loading screens for Morrowind. On an NES. The problem is the physics.

As rightly identified in the earlier segment of this thesis, Totally Reliable Delivery Service is very similar to Gang Beasts – both in design and the multiplayer appeal. First, though, let’s stick with the physics.

Characters can grab onto objects or each other pressing the ZL or ZR; keeping the buttons depressed maintains your gorilla grip. The other controls are jump, the A button, and knocking someone out, the B button. The latter is very hit and miss, so most of the time you’re dashing about (holding down L3) with your little wobbly spaghetti legs.

Picking up items isn’t as tricky as operating devices or vehicles, but if you’re going to go on foot, you’re going to need to dash. For longer runs, however, it will get to the stage where you need to jump in a pickup truck, helicopter – even a rocket, to get from A to B in the fastest way possible.

Using one of the many vehicles is actually a lot of fun. Still, Totally Reliable Delivery Service can be plagued by problematic camera angles and makes Mario 64 look like it had its own crew of cinematographers, tailoring angles as if you were the director. Expect to see your character merge with the floor or body parts appear out of a hot air balloon or other players.

It became apparent that you need the built-in respawn feature as, after delivery number two, I got stuck in a mailbox. A funny anecdote that I’m sure to tell the grandkids one day, but when playing the game, a pain in the sack. Respawning isn’t completely random as you’ll appeal relatively close by, or you can skip back to HQ.

If you want short, hard statistics, I played Totally Reliable Delivery Service as a local multiplayer for about 90% of the time. Going solo was a lonely trade and simply infuriating. The character, no matter how cool he looked with his custom moustache, wasn’t doing what he was supposed to do. Jumping on the online mode was just as irritating but in a different way. Other players just want to dick about, and that’s fine if you know them. Also, as it’s early days, there weren’t many players to compete with.

So, local play it was, and that’s when it all changed. No rainbows and handholding, but enough to stay invested in the game. Now we were in it together, both shouting at the screen, sabotaging the other person as they attempted to half-inch a rocket before you could get there. In that respect, Totally Reliable Delivery Service was a blast, and we put the graphical glitches and frustrating physics to one side.

It didn’t take long for us to bail on the objectives and play Totally Reliable Delivery Service as a sandbox game though, a little bit like Go Vacation. By far this was a lot more fun as a local multiplayer doing your own thing that doing what the man tells you to do. Let some other sucker deliver that propane. We’d invent our own challenges like stealing a hot air balloon and try landing on a blimp, or launching a beach buggy off a ramp onto an island (never worked).

Get Back To Work

Other than solo, local play for two and online play, there’s a customisation option from the in-game menu that’s on the fly. At first, you can’t use many of the items as they aren’t deemed appropriate (a bit silly that). Still, there’s a good selection of novelty facial hair and accessories to customise your delivery buddy.

Without intending to cause any offence to the employees of Totally Reliable Delivery Service, if this is the calibre of the delivery people bringing us our stuff, we’d be doomed. Bring on the drones – hell, I’d wait for Sam Bridges if needs be. The controls can be that bad, that the goals of the game can be redundant pretty damn quick. A shame really as on paper, a Humans Fall Flat delivery service sounds fun.

Don’t be mistaken, Totally Reliable Delivery Service is a lot of fun, but as a two-player local play. Even with the Switch chat app, it’s not the same if they aren’t in the room with you. Having goals to complete in a time limit don’t work as well as they should, but if you break it down as a sandbox to play around with your friends, you can have a blast. Forget about arrows saying GO! or a timer announcing you’ve left the play area – it’s free rein. 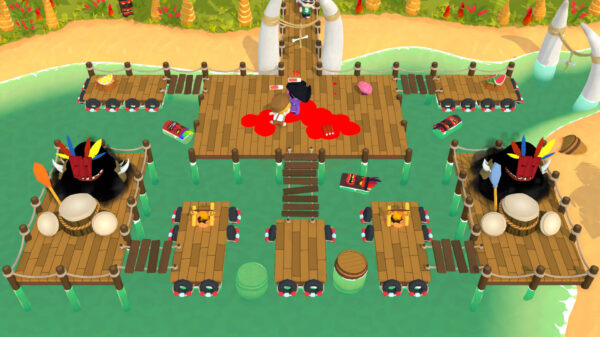 Appease the Hoochooboo and read this Cannibal Cuisine Switch Review. Couch play with a meaty aroma. 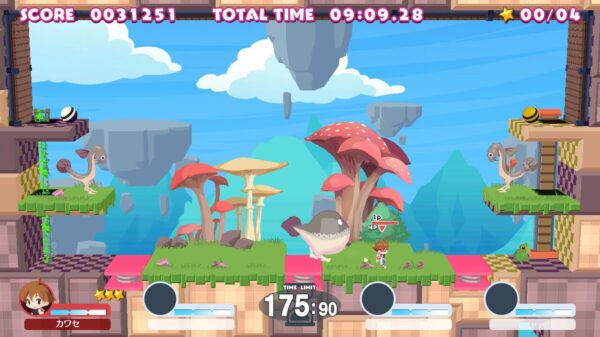 Umihara Kawase BaZooKa! Set To Blow You Away

Umihara Kawase BaZooKa! is set to blow you away this July with a madcap party action game.

A couch co-op underwater for four players, Aqua Lungers is out now on Switch.

Cannibal Cuisine Out Now On The Switch

Dine on friends, then share with your god Hoochooboo in Cannibal Cuisine out now on the Switch. 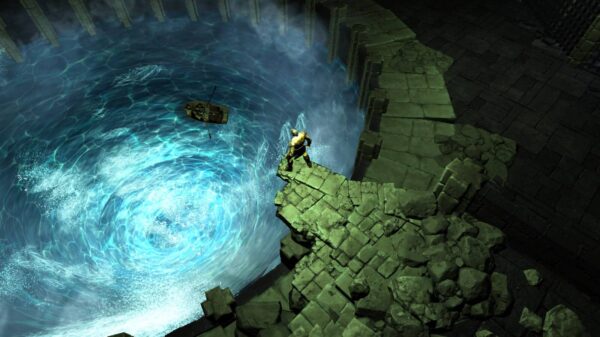 Coming to consoles this month is RPG Tower of Time, which already boasts a 9/10 score on Steam.

Banner Of The Maid Coming To Consoles

A turn-based, anime infused strategy game coming to consoles after it's Steam release: Banner of the Maid. 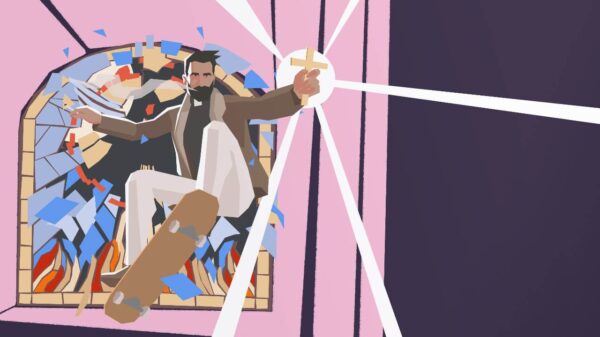 Join anti-hero Bon the exorcist in The Unholy Society Switch Review, coming to a Nintendo near you. 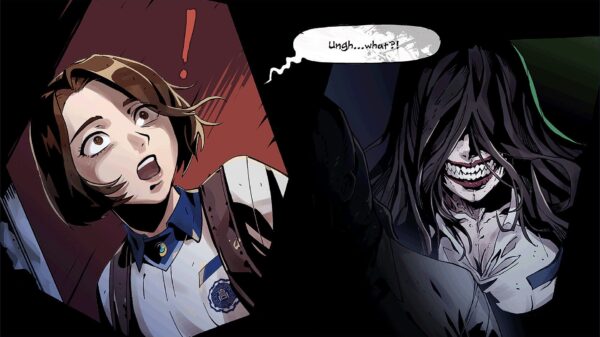 The Coma 2 Vicious Sisters Creeping Out This Month

Crawling out into console territory this month is story-driven adventure The Coma 2 Vicious Sisters.

Appease the Hoochooboo and read this Cannibal Cuisine Switch Review. Couch play with a meaty aroma. 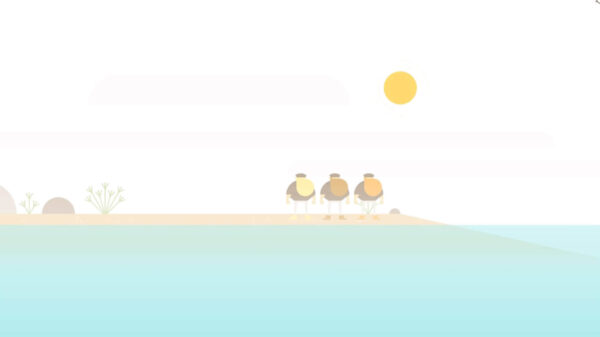 As oldie, but there's no time like the present with a Burly Men At Sea PS4 review.