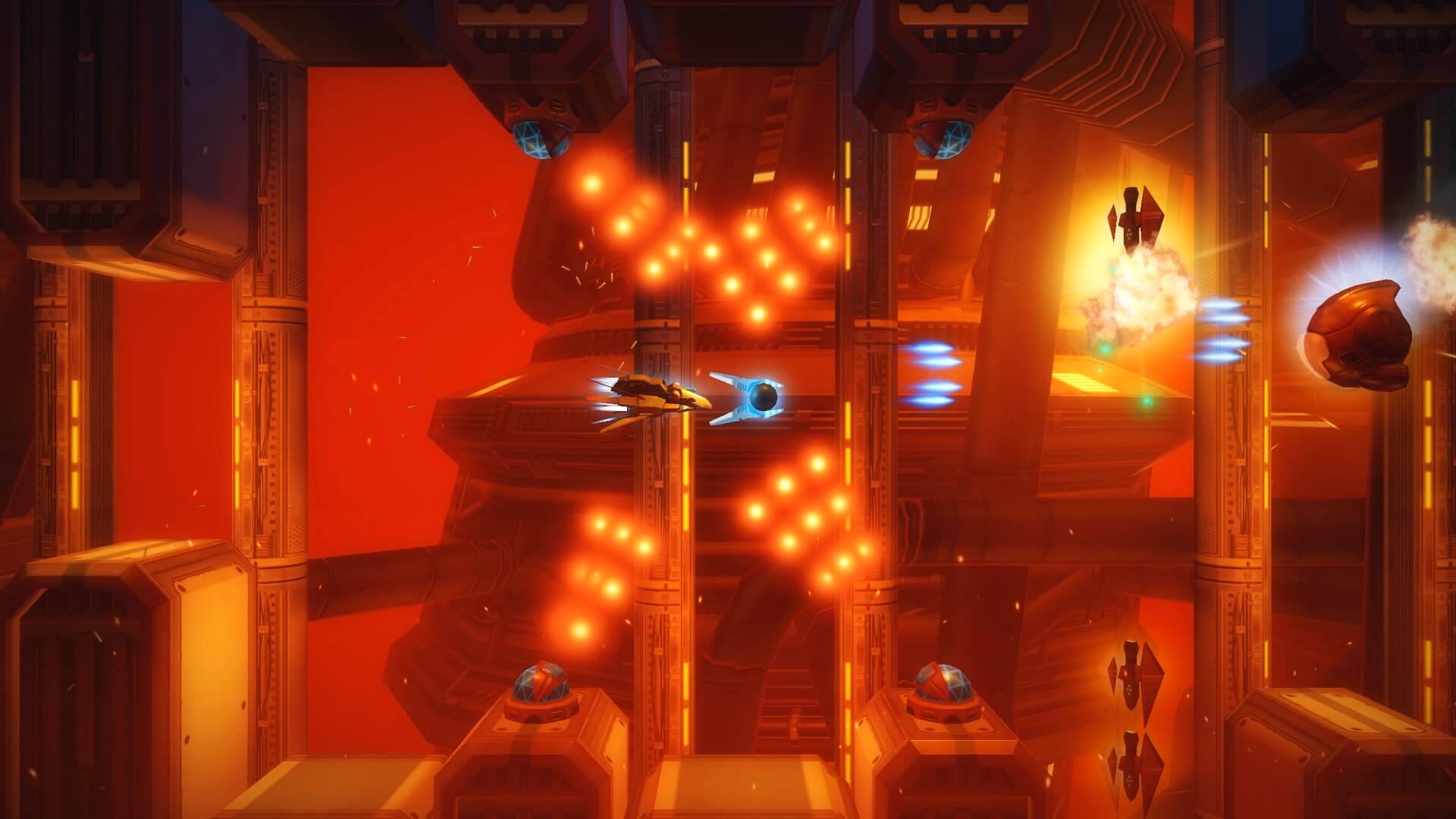 Nintendo feels like an open house for shoot ’em ups, and the latest guest is this Rigid Force Redux Switch review – a classic side-scrolling shooter with power-ups galore, and a control system that’s as natural as handling your special purpose.

I’ve written this review in various stages, so it’s a little fragmented, and despite the luxury of editing, this whisky is telling me otherwise.

We have scales when rating things so that we can communicate whether something’s good or not. A scale of 0-10 would indicate that 0 is something that should be buried next to E.T. the Extra-Terrestrial (the game, precious), and where 10 would be a score that you’d put yourself into compromising positions just to touch it.

I tend to average around a 6 or 7 as I’m nice and I appreciate the hard work that goes into making a game – all aspects of it. Then again, if you’re basing my reviews on whether you’re likely to buy something, I want it to be accurate. That said, I don’t want to avoid giving top marks because it’s not cool. If a game deserves it, kudos be granted.

Rigid Force Redux is practically everything I want in a side-scrolling shooter. It’s addictive, quick to play, features lots of power-ups and has the kind of durability where you’ll come back to better your hi-score or to kill a bit of time until your partner’s guests arrive to talk about boring non-gaming things or other such fun-suckers.

Similar shooters that I’ve enjoyed over the years include Defender, Gradius and one of my favourites on/off the market: R-Type. Rigid Force Redux is the modern take on the latter, and it’s not a reworking of the game, but the developers at com8com1 have dissected what works and included it in their game with the assistance of Headup Games.

I’ll have you know that I’m a point and click fan, not a shoot ’em up nut, but like art, I know what I like, and this I like. This pattern could continue for a few more paragraphs, and we can go to the score but let me tell you what’s so good about the game.

First of all, is the ease in which to get involved in the game. There are cutscenes throughout, but they’re hardly disruptive and add to the experience. However, if you’re that important and don’t have the time, you can turn them off in the menu, as well as adjust the difficulty (there’s an easy mode – YES!), and usual adjustments for sound, text and even the rumble intensity.

There are a few different modes; the standard campaign, arcade and boss rush. If you’re into the story, you can replay the introduction too. In total there are six main levels to compete in, each with their appropriate boss and they all offer a good variety of sceneries – within a sci-fi context. The only real issue is the campaign is quite short.

From my perspective, that’s not an issue as Rigid Force Redux as heaps of replay value, but I appreciate the die-hards will be polishing their pitchforks/cracking their knuckles to vent on Reddit.

In the main story, you have a couple of lives to play with and continues, but once they’re out, you’re on the bench and have to restart from the beginning. Rigid Force Redux is simple in design, but a classic when it comes to shoot ’em ups as it’s pretty easy to get greedy for a hi-score and in the process lose a ship or two.

Points are scored through mass destruction and the collection of energy orbs. Every time you collect them, the energy gauge at the foot of the screen fills up so that you can concentrate fire on larger enemies when pressing the Y button. The attack soon dries up when the energy is depleted, so you need to harvest more orbs.

It wasn’t until I went back to the game when writing this review up that I realised you could use the attract feature by pressing X to horde up all the free-flowing orbs in your area.

Evidence that tutorials can be useful. Sometimes.

Combat can be simplified by holding down the B button for rapid-fire, but as you upgrade your arsenal, you can use these drone-like Force Shards that either fire directly in front of your ship causing more damage, or have a broader range by changing their formation by either pressing the L or R buttons and they will appear in front, or behind you and take some of the hits too.

Everyone’s technique will differ – I’m of the knucklehead ilk who will mostly sway up and down then dash forward to collect some power-ups, only to be hit by an incoming squadron or worse: scenery.

This will change with the boss battles though, as you’ll need to learn the patterns to survive. While they aren’t easy by default, they aren’t the same as a typical bullet hell, though weaving in and out of some of the projectiles requires some finesse.

You can, of course, practice against these bosses individually in the boss rush mode, but the caveat being you need to have fought (and beaten them) already.

The other main feature is the arcade mode. Here you can replay levels you’ve already unlocked (noticing a pattern?), choose a difficulty and aim to get on the leaderboards. With each attempt, you are awarded up to three stars for your performance. Interestingly, in the achievements list, they refer to your rating as an A, B or C. You can put two and two together, however.

Other than the additional features, Rigid Force Redux features a much needed in-game achievement system that few Switch games embrace. There’s quite a lot to earn here – some a bit easier than other such as completing the tutorial or accumulating enough orbs (which is easy when you keep playing).

My favourite that I earned was probably was Purist: defeat a boss enemy without any ship upgrades, if not, Pacifist: finish a complete stage without shooting at all. Both were harder than they sound, but deserve bragging rights – unlike my scores on the leaderboards. I use multiple accounts, but of the various aliases I use, not one of them is remotely anything to be proud of.